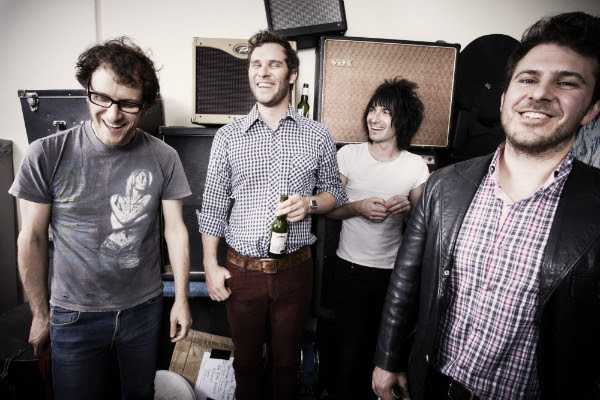 Hold on to your hats, people of Australia: the Peabody indie-post-punk-rock machine is celebrating its 20th birthday.

In an age of disposability and overnight success stories, this one is for the foolish romantics, the believers and for those who think the accepted measure of success is truly an iffy concept.

It was way back in 1994 that the line-up that was to record its first EP (Hi-Cycle, 1997) played its first gig at the Lewisham Hotel, Sydney. That line up changed slightly when Graeme Trewin took over drumming duties in 1999 and went on to record the 2000 EP Rock, Girls & Computers, as well as the classic albums, Professional Againster (2002) and The New Violence (2005) – the latter being labelled “approaching masterpiece status” by Mark Nielsen for Drum Media.

Trewin amicably left the Peas in 2007, which saw the birth of the current line-up of Ben Chamie (bass, vocals), Bruno Brayovic (vocals, guitar), Jared Harrison (drums) and for the first time, a fourth member in the form of Tristan Courtney-Prior (guitar). This line up has released two albums so far – Prospero (2008) and Loose Manifesto (2010), which received 4/5 stars in The Sydney Morning Herald, Brisbane Times and The Age from legendary reviewer, Bernard Zuel.

Throughout these 20 years the band has had some help from some kind, kindred and obviously misguided spirits, but has generally made its own way up the shit stream of the music industry using a fork for a paddle, smiling and waving at those in the private bungalows by the side. These boys-to-men have managed to play thousands of shows around Australia, both as headliners and supports for bands such as You Am I, Youth Group and Hoodoo Gurus; play festivals such as the Big Day Out, Homebake, Livid and Come Together on numerous occasions; and even embark on one very modest overseas tour.

Come and celebrate the noise as Peabody plays two very special shows in Sydney and Melbourne. Set lists will cover the whole 20 years and will feature both the current four-piece line-up as well as the classic three-piece version with Trewin on drums. Plus some very special guests will also join Peabody on stage.

Peabody is also over the moon to announce that the Sydney show will feature their long-time pals Further as special guests. These guys only dust off their guitars to support international bands these days, so it is a rare treat to see the great beast that is Further in action at a local show. They are not for the faint-hearted.

BACK TO ALL NEWS